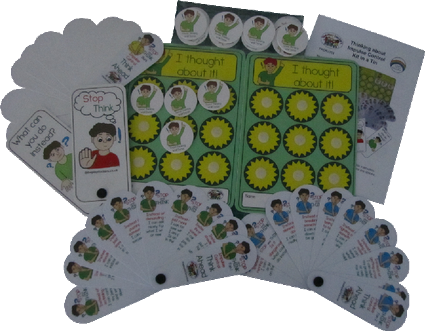 Impulse Control Kit in a Tin

Stop and Think Impulse Control Kit in a Tin, designed for those children who do, before they think’.

Many children find it hard to ask first before they do and tend to be impulsive. Especially those who happen to have ADHD or a hidden cognitive condition. This kit is useful for all children.

The set is designed to help support the child to understand the concept of ‘Stop and Think’ and decide on alternative behaviour instead of immediately reacting.

The kit comes with 2 fans identifying 18 common scenarios such as ‘grabbing’ ‘running’ ‘shouting’ and looks at what can be done instead.

If the adult notices the child being impulsive they can offer up the ‘Stop and Think’ large foam board cards to help the child think.  If the child stops, thinks and acts well then a reward token is given to the child to be displayed on the ‘I thought about it’ display board which are dry wipe boards and have a space to include a child’s name if desired.

There is also a blank fan to add on your own specific targets which can be personalised to individual children.

The kit was designed in conjunction with a school who are working with several children who are yet to be diagnosed but have various difficulties relating to impulse control. Children who have used the set said

‘I like getting the Good Thinking’ tokens – because if I get 9 then I get to have extra time on the computer’.

‘I like the tokens because they stick onto the board by magic’ (actually by hook and loop tape, but who says magic does not exist).

One teacher reported that 2 children in her class were competing to ‘think’ and were praising each other for asking to share, or asking to borrow something. She said

“This self peer analysis of behaviour is very welcome. It is good to see the children helping each other and praising others actions, the kit has rubbed off on the rest of the class although I only initially wanted to use it with two children”

There is flexibility in how the kit can be used so please read the instructions fully before working with the children. The kit is designed for children and young people aged 4-12 yrs.