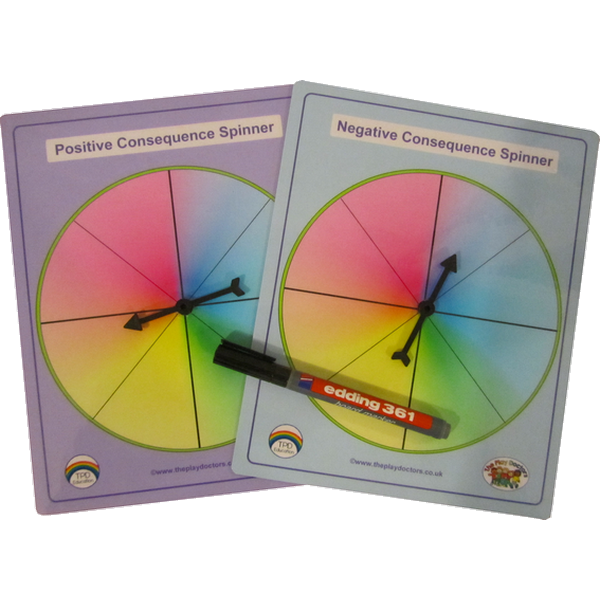 Work with the child to identify consequences and write them on the board. If the child or young person deserves a reward get them to spin the spinner to find out what that reward will be. If they do something that is not appropriate give them two choices ‘do as I have asked or spin the spinner’. If they carry on behaving inappropriately tell them they have made their choice and they need to spin the spinner.

We were approached by a parent who felt that she was always telling her son off. She felt that the relationship was beginning to break down as the son blamed her for any consequence he received for poor behaviour, rather than seeing and understanding why the consequence was being given.

We then spoke to schools, early years settings and childminders and found that this was a common problem. That children and young people did not ‘own’ their own behaviour and resented consequences. We were challenged to come up with an idea to support the child to become part of his own behaviour management.

Start with the Positive Consequence Spinner and ask the child or young person what should happen if they deserved praise or a reward. We did this with a group of 10 children aged between 4yrs and 14yrs. The answers were all different and included:

Dad going cycling with me

Having extra minutes of my phone

Gain a point or get a sticker

We also asked what would be fair if there needed to be a negative consequence to behaviour. Answers included:

Do the washing up

Have a point taken away

One young gentleman told us that when he did something wrong, he had to wash the dog!

After discussion and agreement the consequences are written onto the segments of the two boards. The boards are dry wipe so can be changed regularly. If the child deserves a reward then tell them they can spin their spinner. The reward is then given.

The boards are totally flexible and can be used in at home or in school. Think about how the boards can be used and what type of consequence would work. See the case study for further information.