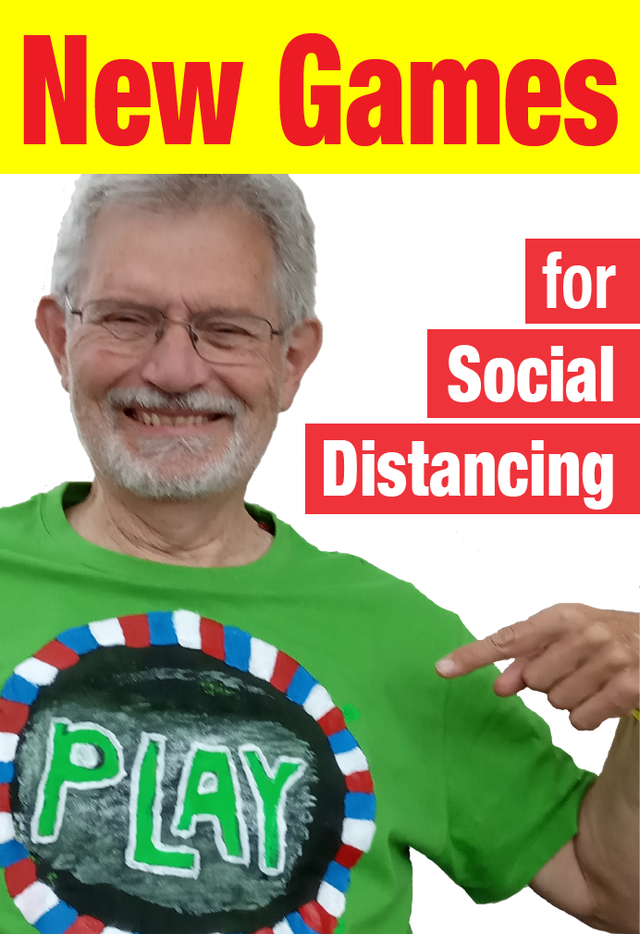 Here is a product that will help you increase participation in your physical fitness programs while also meeting social distancing guidelines!Or, just use them with family and friends and avoid the lock down blues.

People are quite hungry for a chance to take a break from all the dire news. It’s like taking a breath of fresh air. It’s a chance to let all those worries go, to relax, get recharged. Play is needed now more than ever.

Add to Cart
While most New Games involve touching, there are a number that involve no touching and lend themselves to social distancing. It’s not hard to adapt these games, and I provide a page of written introductions to videos of the games explaining what you need to do.
Presented will be 24 New Games on video (plus two non-video bonus surprises) with adaptations for social distancing.
16 of the games can be done on Zoom or similar platforms. Nothing will replace the close contact of other people. But we’re in a situation that none of us have ever experienced before in our lifetimes, and just seeing and interacting with people we know helps bridge the gap until this virus is at a manageable state.
New Games brings people of all ages, sizes, and abilities together like few other things. It doesn’t matter if you’re old, young, skinny, large, athletic, uncoordinated, whatever. All you have to do is want to play. You can. You can also choose not to play. That’s OK, too. No-one is pushed in to an activity.
There will also be a 13 minute video on New Games Leadership, plus a few written tips as well.
The main elements of New Games are to have fun and include everyone who wants to play. No-one is ever eliminated. You are never forced to play, but you can play if you want to.
There are many social skills that are involved, like, to name just a few:
There are also developmental skills skills involved that are part of these games, like:
These are all part of the games, though all are not part of every game.

In a recent study done at Sheffield Hallam University, it was shown how students who participated in New Games activities were more active than they were in their normal PE class, especially those who were the least active. This becomes important as an increasing number of people are becoming less and less active, resulting in more people not being fit. A problem associated with this is ever greater numbers of people who are overweight or obese. While playing New Games are not the only answer to solve this, they can contribute significantly if the games are done regularly.
What is included?24 videos of New Games with descriptions of how to adapt them to meet social distancing requirements to keep players safe, plus two non-video bonus entries.